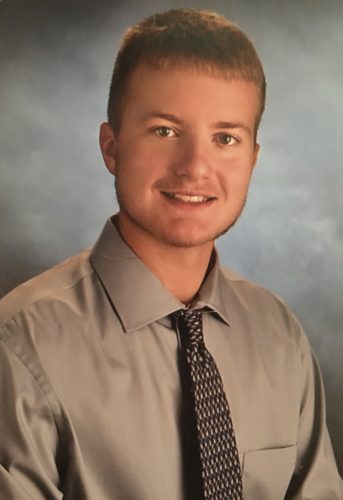 Although all of the class of 2021 are amazing, Evan Dean stands out even more. Evan has always been sweet and the first person to offer to help when help was needed. He makes everyone smile and has been a friend to everyone.

Evan plans to continue his education after high school. He hopes in 10 years to be an accountant in an accounting firm. Evan likes being a senior and being a part of the oldest age group. Some may say, the big fish in the little pond. Evan has lots of school spirit where he has been involved in many school activities such as soccer, tennis, involved in FBLA, and student government. Outside of school, Evan works at the Avalon Field Country Club and also likes to volunteer in his spare time. Although covid disrupted things for Evan, he said it also caused a positive impact in his life. He took the spare time and began to focus on himself and his studies more.

Evan lives by the advice to treat others how you wish to be treated. When asked to give advice to the new freshman, he said to enjoy every moment of your high school experience. “…it goes so fast. I wanted it to go fast, but now I regret that decision,” Evan said. He is spending his last years of high school focusing on his academics and spending time with friends as much as possible. He says in school, all of his teachers were the most influential. Evan said they were all so supportive and pushed him to do his best. Outside of school, his mom was the most influential. Evan said she was always so supportive and would help in any way possible.

Although Evan said he enjoyed his high school experience, he said he would redo it if he had the chance. He feels there were some areas that he could have pushed himself more and improved on. Overall he is just interested to see what the outcome would have been if he had pushed himself just a little more.