First Date Jitters Part II: In the Thick of It 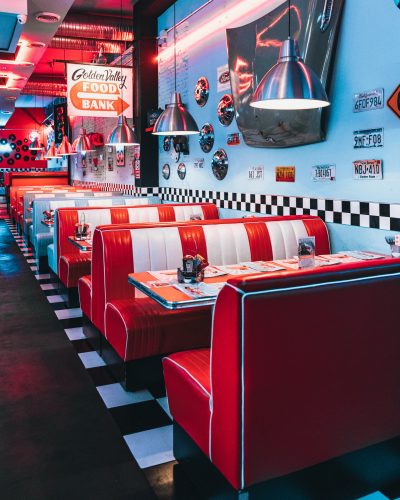 Nobody knows this about me, but I am extremely insecure. A lot of it has to do with the way that I was raised and how my older brothers and parents never once told me I was doing a good job in any of my endeavors, be them creative or athletic. In their eyes I hardly felt adequate. So the way I see myself is completely different from the way people outside my family see me. I look in the mirror or make a mental checklist and I know it’s biased but I don’t know how to fix it. And when I have to do something where these insecurities of mine are shoved into the spotlight, I’m a nervous wreck. That’s pretty much every situation aside from solidifying my status as Harrison High’s resident bad boy.

I had it in my head that I was gifted with no other talents. I wouldn’t say I was a dull person to be around, but I wasn’t a bucketload of interesting conversation either. And that didn’t exactly give me a confidence boost.

Sitting across from Amita in the booth at Freddie’s Fried Chicken, I felt the usual sensations. Sweaty, sweaty palms. Pounding heart that would drown out the soft country music from invisible speakers if it was a decibel louder. Chills that slithered down my spine.

Luckily for me, though, none of this was visible to Amita. The hands would be the only things she could see, and those I kept out of sight, clasping them underneath the table. She probably thought I was just a little shy. If only she knew.

“Are you alright, Mickey?” she asked after taking a sip of her raspberry lemonade. Freddie’s was known for their sweet yet tangy lemonades, ranging from mango to blackberry, and it was almost criminal to go without ordering one.

“Never better.” A little lie never hurt anyone. “And you?”

“I’m great!” She smiled and ran a hand through her long dark hair, which she’d evidently taken a curling wand to because it looked wavier than I’d ever seen it. Her fingernails were painted the same color as her lemonade.

Truthfully, all my senses seemed to be on overdrive. I’d heard about this happening to people when they felt on edge, but never before had it happened to me. Everything that I could take note of with my five senses, I did. Becoming aware of your surroundings is said to make you feel more grounded and help you calm down. Well, it was having the opposite effect on me…probably because it was happening to me against my will.

The people around us were talking about everything and nothing. School. Work. Politics. That horror movie that just opened in theatres and was littered with cheap jump scares. I had a natural tendency to overhear the conversations around me due to the fact that my ears seemed to be bent on picking up words of criticism against me. I couldn’t help it. Being as notorious as I was, people had a lot to say about me, most of which wasn’t good. But their snide comments were my protein shakes. I felt fueled by their disgust. I found nothing comforting about these exchanges at Freddie’s, though. They crowded my brain, each one fighting to be at the forefront. None won, so it was just a jumbled mess of words and sounds that had nothing to do with me.

I wiped my hands on my pant legs to try to get rid of the sweat and slowly brought them onto the table, picking up the remaining piece of fried chicken on my plate. A clear indication of its quality, Freddie’s chicken was always crisp and held its shape, not limp and bordering on soggy like some other fried chicken might be. If you peeled off its golden breading, like I did, it came off in crunchy pieces rather than gag-inducing mushy lumps.

When I was younger, I wanted to work at Freddie’s because I figured I’d be so proud to serve chicken as generously breaded and tender as theirs, seasoned to palatable perfection with onion powder and cayenne and garlic salt. And biting into it, I still did. If I had a different hobby, one that didn’t result in detention after detention, I probably would be working here. But as it was, they wouldn’t hire me with my disciplinary record. So I was obliged to admire it from a patron’s perspective.

“Do you want dessert?” I asked.

Typically, if you were having a date at Freddie’s, you got cookies or a sundae or some sort of dessert on the house. Somehow they always knew who was on a date. At the beginning of your meal, your waiter would tell you with a wink that you’d be getting free dessert tonight. But their psychic abilities had faltered with us, apparently, because our waiter hadn’t said anything of the sort.

If there was something I could control, it was what I was perceiving with my sense of sight. I was making it a point to focus on what was in front of me. That was Amita. She’d never looked as beautiful as she did in this moment, and maybe this was because we weren’t in school and thus not confined to our labels, but whatever the reason, I felt that if I just concentrated on her then I’d be fine. She wore a soft purple tank top and a silver necklace with a small heart pendant, a seemingly permanent accessory of hers. She’d pushed her long hair off her shoulders so it wouldn’t get in the way of her food. And she looked happy to be here and to be with me. That signature smile of hers had hardly left her face since we’d gotten here.

Seeing that, well, I couldn’t help but feel happy too. Maybe, just maybe, if I remembered this feeling, I could let go of my insecurities and ignore my finely attuned senses and have a good time with the girl I liked.

And when I got home, I would write about it, perhaps in one of my old notebooks. I figured this was something worth starting up writing again for.

Right on time, our waiter practically skipped up to our table. “Are you folks interested in any dessert?”

“Could we have one chocolate chip cookie?” Amita’s eyes traveled from the waiter to me. “They’re pretty big, and you wouldn’t mind sharing, Mickey, right?”

The waiter, whose name according to his nametag was Peter, slapped his forehead, causing me to sit up a bit straighter in the booth. His eyes were as wide as golf balls. “What a ninny I am! I can’t believe I didn’t know you two were on a date. So one cookie, sir? It’ll be on the house, of course. You know how it works around here.”

I could hardly contain my smile. “One cookie is perfect.”

This entry was posted in Series. Bookmark the permalink.
top