In the Neshannock High School, the boys’ bathroom has recently become more of a hangout than a restroom. Instead of going to use the facilities the boys, mostly younger of 7-8th grade, like to vandalize the walls by writing on them with pencil and even sometimes pen, they also leave garbage, and more, all over the floor, and damage the sinks and/or the stalls on occasion. Although this has always been an issue for the facilities and the janitors that have to clean them, it has gotten worse over recent years.

Talking to many boys in 12th grade, I discovered I am not the only one dealing with these issues. More problems that I was not aware of surfaced as kids told me their stories and complaints. One student even voiced this complaint “the security guard will knock on the door and ask what I am doing as I am using the toilet.” The same student goes on to say that there is an invasion of privacy to some degree. Obviously, it is the security guards’ job to make sure there is nothing wrong going on in the bathrooms, but knocking on the door to question a student alone in a stall, while the student is actually using it, is truly an uncomfortable situation that should not be happening.  And, it makes you wonder why our security guards even have to do this.  For a 12th grader, this is really annoying, but what’s more annoying is that there are students in the building whose behavior is now making this part of our security guards’ jobs.

Although the new complaints were found to be embarrassing enough for the school, the same old problems are still going on. Problems such as vandalism, littering, using the facilities improperly, and making the restroom a hang out spot never seem to slow down. As I asked many different boys in the school their complaints with the boys’ bathrooms they all seemed to be the same. Urination on the floor where boys walk was the biggest complaint, one student specifically says “I walk in to use the bathroom and walk out with my shoes sticking to the floor.” That complaint alone should be dealt with immediately as it is foul and disgusting. Writing on the walls was next. Profanity, names, pictures, and hate symbols cover the restroom walls. The people that do these things need to grow up and respect what is given to them. The disrespect that these restrooms see is out of control, the disrespect that the janitors get is incredible. Changes need to be made.

Along with the improper use of the facilities and the writing on the walls, garbage on the floor seems to be another staggering problem. Gum wrappers, toilet paper, homework:  these are just some of the items someone may find on the floors of these restrooms. At times one may come across wet toilet paper rolled into a ball just sitting on the floor.

Teachers also share the same feeling about these bathrooms.

Mr. Burkes stated this behavior “has been going on since I began to work here.”  Coming from a teacher who has worked here for a long time and from a teacher that obviously has yet to see change.

Resolutions to these problems could be tricky as the restrooms should be a place of privacy and disclosure. Instead, they are now places of immaturity and recreation. It would be hard to monitor what is going on in the restrooms due to the invasion of privacy that it would most likely cause. To have a guard or supervisor in them could work, but I feel that job really shouldn’t be necessary as we are in High School, 7-12 grade, not in the elementary school where a teacher must walk their entire class to the restroom. I think it is about time we grow up and use them correctly and stop disrespecting what is given to us. 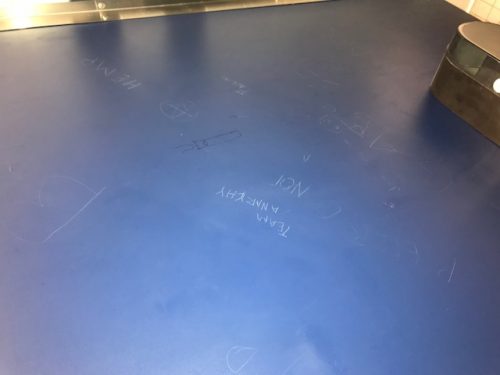