Reflections on Being a Teacher’s Assistant 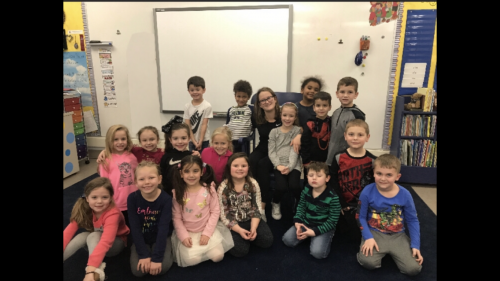 Many students here at Neshannock High school have taken the opportunity of being a teacher’s assistant, but many may see it just as an easy class for a good grade. I, personally, love this class and often wish I could spend all day with the kids. I understand being with kids and teaching them might sound like the worst possible idea to some people, but there are more benefits than just being there to help a teacher with part of their day. Not only are you very helpful to the teacher you get assigned to, you get to teach kids, and you can also become friends with all of them.

I have learned many important things from my day to day encounters with the kindergarteners I work with. Not only have I been teaching them, but they have been teaching me things as well. They have showed me  things such as being friends with someone for no reason, speaking freely, being very observant, and loving unconditionally.

I have noticed that younger kids are very friendly. They can become friends with another kid for no reason at all, and they can still be best friends. We all remember when seats were often changed in our earlier grades, in my class the seats are changed once or twice a month. Every time the seats are changed the kids make new friends and become best friends within a day or two. A great example of this was shown to me when we changed their seats in September, there was one little girl who I had never heard say one word. She was always quiet. When her seat was moved next to another girl in the class, she started talking within the next week! I was so surprised that she was having full conversations with the girl like they were best friends. They have showed me how easy and simple friendship is.

Another thing they have taught me is how freely we can speak and express our emotions. Every morning one of the little boys comes in with such enthusiasm for the day. He will run in the room with his hands in the air yelling “whoopie!” He will then proceed to comment on one of the other kid’s outfit for the day, one day telling a girl he liked the polka dots on her shirt and another day telling one of the boys how cool his football jersey was. It puts a smile on my face every morning. He is so fun and happy. Another one of the boys in the class is the exact opposite and walks in the room sad and gloomy every day. Sometimes it can be hard to convince him to get that day’s morning paper based on his mood. He is not afraid to express his feelings in the morning, he and I both know he might even need a hug to get through the morning. They are all so unique and they don’t hide it like we may do now here in high school.

They have also showed me how easy it is to see the little things in life, they are very observant. Often if they see words on my clothes that day they will have me read it to them because they can’t read it. Another thing they have done is if I am humming a song they will ask me what song it is, and if I just say it is from a movie they want to know what movie it’s from, meanwhile I didn’t even realize I was humming. They are also very observant when it comes to that month’s holiday decorations. I am in charge of helping out with the decorations and even if I only change one of the decorations they are so fast to notice. It is just so funny to me how easy they notice things just as little kids.

The thing I have noticed most from the kids is their ability to love unconditionally for the smallest reasons. One day one of the girls asked me to tie her shoes, once I finished, she gave me the biggest hug and told me she loved me. It was for such a random thing, yet so simple and cute. Another example of this is between a boy and a girl in the class. One day the boy called me over to his table looking nervous, I asked him what was wrong and he was sad that the girl that sat across from him at the table wasn’t there yet. I told him that it was okay and that she was out in the hall unpacking her backpack, he breathed a sigh of relief. I was puzzled as to why he was worried that she wasn’t coming, so I asked him why. He told me he was going to ask her to marry him at recess, this was obviously not what I was expecting so I asked him why he wanted to marry her. He told me he wanted to marry her because she is his friend, nice, and good at drawing. Those were his only reasons. My final example of love that these kids have taught me comes from one of the students that I least expected. One day I went back to the class during tenth period to read them a story before they packed up their things. Once I had finished and they had packed up one of the boys got really upset because I was leaving. He told me that he wanted me to go with him to his house to play and read him more books. And to try and convince me he told me he had a sister I could be friends with. I was so touched that he wanted me to go home with him. These examples all showing how loving younger kids can be.

These are only a few of the things I have learned from my little students. People say kids are the most truthful people there are. They always say what they think, it by seeing them day after day, I think they are beginning to run off on me.

So I suggest becoming a teacher’s assistant to anyone who may be interested. Again, I realize that children may not be everyone’s strong suit, but I think anyone who’s even remotely interested should give it a try!