Historical Focus: A Thank You to Suffragettes 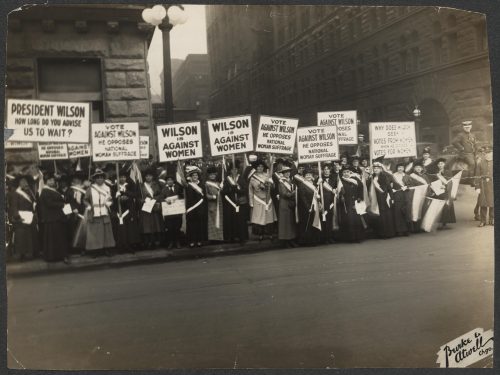 I believe today is as fitting a day as any to honor the many women who fought for the right for other women to cast their ballots. They were warriors. That much is certain. To overcome opposition from men and even other women (I’m talking about you, Josephine Dodge, founder of the National Association Opposed to Woman Suffrage) takes a certain strength and resilience that not many can say they possess. Speaking out on their beliefs and hopes and dreams for the future of women without care of backlash is not something that everyone can do. Although religious leaders mocked your efforts and antisuffragists declared that women simply didn’t have the time to vote or stay in the political loop, you persevered. You soldiered on with your picketing and your orating. For that I thank you.

Because of you, every woman over the age of 18 now has a political voice. It’s been almost a century since the passage of the precious 19th amendment. A hundred years ago men dominated the polls. Even though states like California and New York had granted women full voting rights prior to this amendment, women still weren’t enfranchised across the country. Female suffrage still wasn’t a national concept. But your fiery speeches and your strong-willed spirits paved the way for the 19th amendment, and that deserves a standing ovation. Women can now effect lasting change for their sex and hold positions of political power.

I would like to extend my sincerest gratitude to Elizabeth Cady Stanton and Lucretia Mott, who organized the fateful Seneca Falls Convention in 1848. This laid the foundation for the women’s suffrage movement, a crusade that lasted over half a century. At the convention Stanton read her Declaration of Sentiments. “All men and women are created equal,” she asserted. In 1848 this was a controversial statement, but she made it nonetheless. Mott went on to publish Discourse on Women, in which she described the oppression of women by the patriarchy.

Special thanks to Sojourner Truth, who was doubly persecuted as an African American and as a woman. “Ain’t I a woman?” she asked her audience in arguably her most famous speech of the same name, delivered in Akron, Ohio, which is a little over an hour’s drive from our school here. And indeed she was. Remarkably tall at almost six feet in stature, she had an imposing figure that matched her zealous demeanor. Not only was she a passionate women’s rights activist, but she was also involved in helping runaway slaves on their quest for freedom. Ms. Truth remains today a prime example of female and African American excellence.

Women picketing the White House in 1917 displayed signs screaming statements such as these. They were appealing to President Woodrow Wilson to support the “Anthony amendment”, lovingly named after famed suffragette Susan B. Anthony. As a result of this protesting, between June and November of that year, 218 dissenters from 26 states were arrested. Doubtless these women knew the risks of demonstrating, but they demonstrated regardless. That in and of itself calls for a round of applause.

Finally, thank you to all suffragettes, not just those who made headline after headline. Lesser known crusaders struggled with equal bravery and tenacity. I would like to take the time now to acknowledge Ida Wells, an African American activist who, like Truth, championed gender and racial equality. In 1872, Victoria Woodhull became the first female candidate for president, an obvious milestone in the women’s rights movement.

Every activist, clad in the armor of passionate words, contributed to the right to vote that women 18 years old and older enjoy today. The battles they fought against men and against their own sex will not soon be forgotten.