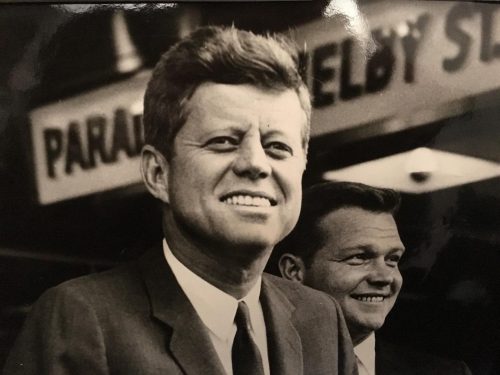 In this world, people are born everyday, some grow up to be doctors, teachers, or police officers, but only few grow up to be legends. John Fitzgerald Kennedy was born May 29, 1917 in Brookline, Massachusetts to Joseph P. Kennedy, a prominent businessman, and Rose Kennedy, the daughter of a politician. Growing up, John, better known as Jack, was often sick, he once fell so ill with scarlet fever that his parents feared for his life. Jack attended an exclusive boarding school in Connecticut called Choate, where he was very popular among his peers due to his bubbly personality. While at school, Jack participated in several sports such as football, basketball, golf, and tennis. Throughout adolescence, Jack’s father always pushed his children to try their best, and would tell his children “When the going gets tough, the tough gets going.” Academically, Jack was a rather subpar student, as he only really kept up with classes he enjoyed like english and history. Kennedy also fancied reading, but never for any of his classes. A classmate, Lem Billings, recalls that Jack had a daily subscription to the New York Times. Jack went on to graduate from Choate in 1935, and enter the next chapter of his life, that took place in Cambridge.

In 1936, Kennedy entered Harvard University, where his brother, Joe, was already studying. Jack majored in government and international relations, he also played football. While playing one day, Jack had a bad fall that ruptured a spinal disk, this injury would never completely heal. During 1937, Kennedy’s father was given the position of United States Ambassador to England, with this job, Joseph took the whole family on a trip to England. At this time, Europe was not an ideal place to be as World War II neared, and tensions were rising. However, Kennedy paid very close attention to everything happening around him, and used his trip as a learning experience. In 1940, Kennedy would take all the observations from his trip to England, and turn it into a book titled Why England Slept, that outlined why he felt England was unprepared for war with Germany. Kennedy used this book as his senior paper, but it also became a bestseller. Unfortunately, these good times would not last forever because on December 7, 1941 the United States entered WWII following the Pearl Harbor attack, and Jack would be deployed in 1942.

Kennedy was stationed in the South Pacific, and was the commander of PT-109, a patrol torpedo boat that was used to take down any enemy boats. On August 2, 1943 while patrolling the waters, Lt. Kennedy spotted a Japenese boat nearing his ship at full speed. Kennedy quickly attempted to steer out of the way, but was unsuccessful as the rival ship was significantly larger, and Kennedy’s ship would ultimately get hit. This blow would split PT-109 in half, and leave Kennedy and his crew stranded in the Pacific. At this time, it was crucial that someone come up with a strategy to reach safety, and that is just what Kennedy did. Lt. Kennedy ordered everyone to grab hold of a buoyant piece of the boat, but Patrick McManhon, one of Kennedy’s men, was badly injured. So, Kennedy took it upon himself to haul McManhon to safety because no man gets left behind. These courageous efforts brought all the men on PT-109 out of this situation alive, and earned Jack a Purple Heart. Sadly, Joe, Kennedy’s brother would not make it out of the war alive, and this would greatly inspire John F. Kennedy to begin his political career.

In 1946, Kennedy decided that he’d run for Congress in Massachusetts eleventh congressional district in which he won, marking the beginning of his political career. Congressman Kennedy served three terms in the House of Representatives as a democrat, and in 1952 was elected to the US Senate. Not long after being elected, Jack would marry a 24 year-old journalist named Jacqueline Bouvier, better known as Jackie. The two would welcome their first child Caroline in 1957, the same year Jack won a Pulitzer Prize for his book, Profiles in Courage. Some may say that Jack had it all at this time in his life, but Kennedy often found himself bored with his job, and yearned for something more substantial. Then, Kennedy decided that he’d run for president in the 1960 election.

Throughout his campaign, Kennedy was a favorite among Americans as he was young, and had progressive ideas. Kennedy highlighted the idea of a “New Frontier” that indicated a change in America, as space exploration was at an all time high, and the Civil Rights movement was larger than ever. At the time in America, televised debates were beginning to gain popularity, and people found themselves drawn to Kennedy’s undeniable humor, and youthfulness. On November 8, 1960, President Kennedy overcame Nixon in a close race, and became the youngest president in history at age 43, and the first Roman Catholic president. Jack was sworn into office on January 20, 1961, and delivered a legendary speech in which asked Americans to “Ask not what your country can do for you, but what you can do for your country.”

Within his first year of presidency, Kennedy was dead set on catching up with other countries, whether it be with the space race or nonprofit organizations like the Peace Corps. The Peace Corps were created on October 14, 1960 even before Kennedy was elected president. This organization urged people to travel to a developing country, and devote their talents to aiding them. Once again, Kennedy asked Americans an important question “How many of you who are going to be doctors, are willing to spend your days in Ghana? Technicians or engineers, how many of you are willing to work in the Foreign Service, and spend your lives traveling around the world?” For the duration of his presidency, Kennedy proved that his main concern was to achieve peace, not only for America but for all countries. 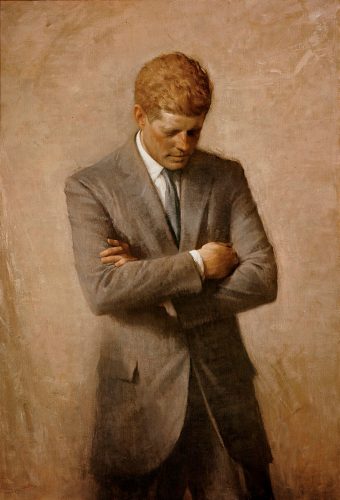 Despite Kennedy’s craving for peace, his days on the job were not easy as most days he was dealing with tense international affairs, most notably the Cuban Missile Crisis. It all started on October 16, 1962 when McGeorge Bundy received photos that depicted Soviet weapons being assembled in Cuba. During the next couple of days, Kennedy created a team consisting of his brother Robert Kennedy, Theodore Sorensen,  C. Douglas Dillon, Dean Acheson, Robert Lovett, and Llewellyn Thompson. Together, they debated what the best course of action would be, some recommended waiting it out for a bit, other suggested military action, Kennedy disliked that idea particularly as he claimed a surprise attack on Cuba would be eerily similar to Pearl Harbor. Kennedy alternatively chose to attempt to reach a compromise with Nikita Khrushchev, the leader of the Soviet Union, but this proved to be difficult because much of what Khrushchev was telling Kennedy was false information. Then on October 22, 1962 Kennedy addressed the nation where he stated “The 1930s taught us a clear lesson: aggressive conduct, if allowed to go unchecked and unchallenged ultimately leads to war. This nation is opposed to war.” Later in that month, both Kennedy and Krushchev came to the conclusion that war would not be good for either country, therefore all Soviet missiles were removed from Cuba.

Not only could Kennedy handle international affairs with expertise, but he also addressed national one’s with grace, and urgency. The 1960s was a pivotal time for America, new technology allowed for communication in ways never before seen, this also paved the way for the largest, most powerful Civil Rights movement. Lead by Martin Luther King Jr., the nation was undergoing an immense change in how African American citizens were being treated. Although African Americans were set free decades ago, and even given the right to vote, prejudices prevaled. Events like the Montgomery bus boycott, Selma March, and the March on Washington forced America to acknowledge the blatant inequality African Americans faced. On June 11, 1963, Kennedy gave a Civil Rights Address where he challenged Americans to let go of their prejudices, and proclaimed that all Americans should have equal opportunities. President Kennedy said “As I’ve said before, not every child has an equal talent or an equal ability or equal motivation, but they should have the equal right to develop their talent and their ability and their motivation, to make something of themselves.”

On November 21, 1963, Kennedy traveled to Dallas, Texas alongside First Lady Jacqueline Kennedy as he was to deliver several speeches. Then suddenly, while cruising through a vibrant crowd of people, President Kennedy was shot by Lee Harvey Oswald. This event caused colossal sadness throughout the country, not only amongst his supporters, but among Republicans, and those who were not heavily involved with politics. There is no doubt that Kennedy was able to bring this country together, he possessed a unique charisma that drew people in, and allowed him to be seen as a friend rather than an intangible leader. At his core, Jack was a family man who valued peace and kindness. As a president Kennedy used those same values to interact with other countries, and inspired citizens to believe in those values too. The qualities of President Kennedy can never be duplicated, and Jackie Kennedy said it best, “There will be great presidents again, but there will never be another Camelot.”