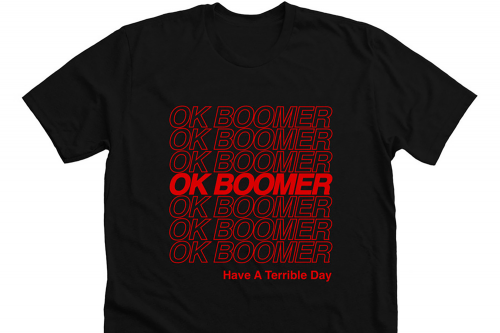 “Ok Boomer” is an internet meme/phrase that gained popularity in 2019. When it originally began, it was used in 2015 as an insult on forums such as 4chan. “Ok Boomer” was aimed towards people who were seen as out of touch. Then the phrase gained more popularity until it eventually went viral on TikTok earlier this year. The meme was also turned into merchandise:  stickers, shirts, mugs, flip-flops and hoodies that say “Ok Boomer, have a terrible day,” in the style of a “thank you for shopping” plastic bag.

The phrase has gone beyond a simple meme. Many from the Millenial and Gen Z groups describe problems that they see as the result of the Baby Boomer generation. Younger generations have a lot of economic and environmental anxiety about the future. There is little time to act on climate change before it is too late. College costs a ridiculous amount of money, and once students actually graduate, it’s harder to get a job than it was when the Boomers got out of college. On top of that, student debt is higher than it used to be and more difficult to pay back.

Those of the younger generations see a big divide, when they look at those who are successful.  Many of these successful individuals happen to come from the “Boomer” generation, and those in the younger generation feel that there’s not a lot of understanding of the new problems they face.  In addition to the issues with climate, college and the job market, millenials are working harder for less money in low-paying jobs. Those in the younger generation see people such as Jeff Bezos, Bill Gates, and Warren Buffett with a combined net worth of $248.5 billion dollars. These three men have $3 billion more than the bottom 160 million people in America.  The great majority of Millenials and Gen Z fit in that “bottom 160 million,” and they view those at the top being from the older generation.

Though 40% of Millenials have a bachelor’s degree, only 25% of Boomers have a bachelor’s degree. A 2017 study done by Young Invincibles, a nonprofit, shows the economic divide. The full study can be found here. Young adults now are making about $10,000 less than young adults in 1989, about 20% less overall. Also, when Boomers were young adults, they owned twice the net assets that young adults now do. Further, racial inequality persists and young African American’s income has declined by a third since 1989.

A conservative radio host claimed that boomer was an ageist slur. He tweeted this, and at some point deleted it, although screenshots of the tweet are still out there. Twitter does not have any kind of dislike button, so to figure out about how many people disagree we can look at the number of replies. Whenever a bad opinion, like this one, gets posted there are more replies than likes. His tweet had about 3,000 likes, and 20 thousand replies. Nearly 7 times as many replies as likes. After that tweet, the official Dictionary.com twitter account tweeted out a rebuttal, basically saying that the radio host was wrong and his tweet could be offensive.

“Ok boomer,” is the younger generations’ way to fight back against older generations. As a member of Gen Z, I feel we are left to deal with problems like income inequality, numerous financial crises, and the increasing cost of college or other forms of higher education. Boomers are responsible for climate change, which will have irreversible effects if we don’t take steps toward stopping it soon.

To boomers, “ok boomer” might sound disrespectful. Although, it’s a completely valid response and comparable to the “kids these days” phrase that boomers use. Both phrases are just used to respond to another generation and criticize them for how they act.