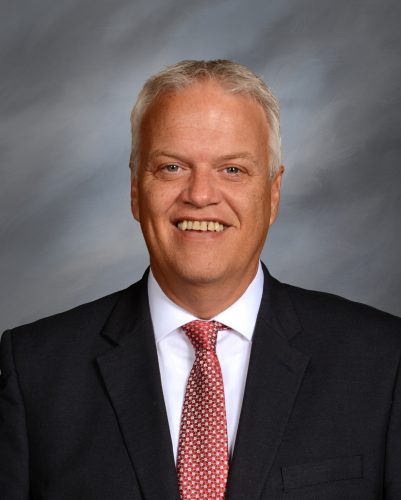 One of the unsung heroes of a typical high school is the superintendent, and Neshannock is no different. Dr. Terrence Meehan may not be as familiar to students as the teachers, who they see on a daily basis, but his role here is no less important. If one were to compare the faculty of a school to a film crew, he would be the director—operating behind the scenes but tasked with arguably the most crucial duties.

When Dr. Meehan sat down on a chilly September morning to talk about himself and his job, it was immediately clear that he was a very people-oriented person. He said that his favorite part of his work was getting to interact with the people, both in the school and in the broader community. He enjoyed the opportunities he had to familiarize himself with the people in the area in which he was raised.

This area played a big role in his taking this job. Being from Neshannock, he knew the general atmosphere already. He knew that it was a good school.

His journey in education was a lengthy one. He went to become a high school teacher and received a bachelor’s degree in education, then two master degrees from Duquesne University that resulted in certification in secondary and elementary principalship, instructional technology specialist, and supervisor of curriculum and instruction. After holding the position of Assistant Superintendent at New Castle School District, he decided to go back to where it all began, in the land of red and white.

That was six years ago, and since then, he has learned quite a bit. During the interview, he stressed the importance of paying attention to the “little things”. That way, the big things become easier to manage. He also remarked that he has become more patient and understanding over the course of his six-year tenure here. These are good life lessons, not just tidbits of advice to take in for future reference when entering the workforce.

One of the other things Dr. Meehan emphasized was that no day is the same in the office of the superintendent. Every day brings with it a new surprise, a new adventure. One thing remains the same, however: there are a great deal of meetings. He could have principal conferences and meetings regarding the state of the roof all in a twenty-four hour period.

His day begins rather early. Even before he has to arrive at the school, he is checking his emails and making phone calls from home. Families are made aware of cancellations and two-hour delays by none other than the superintendent himself.

This year, there was an extended cancellation of sorts in the form of COVID-19. Every day, in the spring, Neshannock students logged onto Google Classroom, unsure if this would be the new norm. Indeed, there was some uncertainty as to what the 2020-2021 school year would look like.

Dr. Meehan and the rest of the Neshannock faculty, however, worked together throughout the summer to come up with a sound reopening plan. Ultimately, students were free to choose which mode of learning (online full-time or a hybrid instruction alternating between online and in-person) worked better for them.

The superintendent strongly believes the safety measures the school has put in place are working, and this is in great part due to the students. Obviously the smaller class sizes aren’t exactly easy to miss, but beyond this are mask mandates, crowd control, social distancing, and automated hand washing. The success of these initiatives comes down to the pupils, because no one can force them to abide. Dr. Meehan has noticed that they have fortunately been, for the most part, compliant with the new “rules”, which makes implementing them less difficult.

“With change comes growth,” Dr. Meehan said. And he wasn’t just talking about the touch-free hand towel dispensers in the bathrooms. COVID-19 aside, he has seen some changes at this school since he took the reins as superintendent. From new lockers to new heating systems to new teachers, Neshannock isn’t the same as it was six years ago, and every alteration made to the school has been designed to improve the quality of student and faculty experience.

Outside of office hours, you can find Dr. Meehan playing with his dog, Moira. Formerly his mother’s dog, the bright pooch joins him on daily runs in cemeteries and local parks. She is quite the character.

The superintendent is also quite fond of pizza. His current favorite spot to go is Mangino’s in Maho

ningtown, although he looks on establishments like Villanova and Augustine’s with a great degree of fondness. They were around during his childhood but have since closed.

Indeed, one thing is for sure with Dr. Meehan. No matter the time, and no matter the place, he is doing his best to make Neshannock the blockbuster of the county.