This June, Pittsburgh hosted no public Pride celebrations. Nationally, a similar story was told. COVID-19 did not leave Pride unscathed anywhere. The virus put a definite stop to the joyful, colorful marches that are normally looked on with a great deal of excitement by cities around the country.
For those in the LGBTQ+ community, the month of June is fondly regarded as Pride Month. Marked by festivals and parades full of rainbow fun, it is a month dedicated to honoring sexuality and remembering the landmark Stonewall riots of 1969, a key step forward in the gay rights movement. Pittsburgh has a number of its own events. One is called Pittsburgh Pride, and it’s the third-largest happening in the city.

On May 8, the Delta Foundation issued a press release announcing that Pittsburgh Pride would be postponed to the fall. In early August, though, the event was canceled altogether, and the Foundation made the decision to disband. Yes, there are other Pride happenings in Pittsburgh, but this has been the biggest, and its future is uncertain.

Despite the cancellation of in-person celebrations, however, the community still managed to keep the spirit alive. Colorful virtual events, including Can’t Cancel Pride, helped LGBTQ+ individuals around the country feel less alone. Also, a simple Google search turns up numerous ways to celebrate Pride at home. From having a small solo dance session to setting up a Pride-themed movie night, it’s not as hard as you might think. Not as extravagant, perhaps, but still meaningful.

Yes, Pride went virtual this year. It had its high points and its fair share of low points.

Like many members of the LGBTQ+ community, Ava Moses, a Neshannock senior, took advantage of social media to commemorate this month of equality. She reposted things on Instagram and on Snapchat to inform others on why LGBTQ+ rights are crucial, or simply to share pictures of people in the community living their lives. Although, having been looking forward to the parade a great deal, she was bummed that this year’s Pittsburgh Pride was postponed and then ultimately cancelled, she decided to make the best of it and enlighten the people around her on a community whose history they probably didn’t know.

“If you aren’t at an event, you have more time to educate people,” she said. She thought this could be a good thing for the community. It might be beneficial to take the time to be the teachers of a very undertaught lesson.

And there were a lot of teachers this year. In June, the official Pride Instagram account featured numerous LGBTQ+ couples or individuals, with captions telling their stories or just describing them. Seeing their undeterred spirits would bring a smile to anyone’s face, as well as lead them out of the dark in terms of what it means to be LGBTQ+. Because that’s the thing: there is no one strict definition. 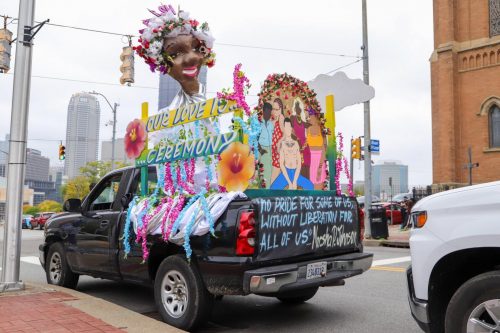 A decorated truck at the People’s Pride 2020 event, with a quote by Marsha P. Johnson on the rear bumper. Photo by Sofia Hassan

A “sister” account, @lgbt, followed in similar footsteps. Later in the month, they reposted a lengthy list of Black LGBTQ+ organizations and funds to support. June showed that the Black Lives Matter movement and Pride are not as loosely connected as one might surmise. In fact, as many summertime educators pointed out, the gay rights movement is rooted in the activism of Black transgender women such as Marsha P. Johnson.

Another Neshannock student, who wished to remain anonymous, wasn’t exactly bouncing off the walls over the lack of in-person celebrations this year. She felt less motivated to honor herself, because without the parades and the concerts, it didn’t seem as special. However, a number of social media influencers helped keep her spirits up during those uncertain times. Their messages of being yourself and not letting let discriminatory people get you down served as words of encouragement and comfort.

Even so, she saw the cancellation of public Pride events in Pittsburgh and around the country as potentially “demeaning for some”. As already mentioned, people mainly took to social media this year to be Proud, and it raised a lot of calls for a “straight pride month”. It certainly wouldn’t have been a morale booster for a member of the community to see hordes of straight people complaining that they didn’t have a month all to themselves…and starting petitions. The petitions didn’t get anywhere, but the fact that they were started in the first place speaks volumes.

This year definitely was a test for the LGBTQ+ community. According to some, the sense of community and the reassurances that it’s okay to be different felt a bit compromised due to the celebrations being cancelled. These feelings are certainly valid, because it is hard to feel like a group when actually getting together as a group is not feasible.

As it turns out, however, you can’t put a stopper on Pride. Setbacks, such as the absence of city-wide events, can be overcome and seen as learning experiences. Staying six feet apart, or interacting from behind screens, does not tear the community apart. Being online does not limit expression, but rather opens up said expression to a much greater audience.

With their snazzy outfits and uplifting words, influencers helped stress that the spirit that infiltrates the parades can’t be quelled. You can be Proud anywhere, anytime, with a face full of makeup or not. The “extra-ness” of Pride is just part of the fun.

Despite the emphasis on online Pride this year, though, all was not lost in terms of public celebrations, at least in the City of Bridges. On the weekend of October 9-11, the organization Sisters PGH hosted People’s Pride 2020. Due in part to this year’s wave of protests against police brutality, the theme was Black Trans Lives Matter Too. The cold fall weather might have been a strange addition to the celebrations, but it was merely a chill to a community that has seen it all and come out stronger than ever before.

How Pittsburgh gets PROUD during a normal year. Photo by Sofia Hassan