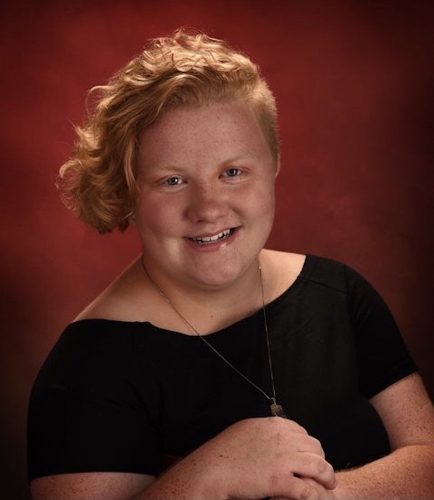 Many know Isabel Criswell as a witty, talented, and intelligent person, and they are completely right! Criswell is an accomplished band member and student, with excellent grades and a sharp mind.

Criswell–who prefers they pronouns–attended Neshannock all of their life, though they would have preferred to attend a school like LCCTC or Lincoln Park to get on a path to a career sooner. Instead, Criswell plans to continue their education at Penn State Behrend.  They would like to go to school either for digital arts, media, and technology, or for English. If Criswell pursues an English degree, then the plan includes a move to South Korea and to English in Seoul. Criswell has always loved Seoul, and would enjoy going there.

Criswell is involved in many extracurricular activities, including band, TSA, Girl Scouts, Science Olympiad, and yearbook. Band, for Criswell, has meant playing the trombone since the fifth grade, while also learning a bit of tuba along the way.  Most recently, it’s been a focus on learning the trumpet. Out of all Criswell’s activities, however, TSA and Girl Scouts rank as the two favorites. In school is English, Criswell loves English because of one special teacher.

In school, the teacher who has most influenced Isabel Criswell is Ms. Janaszek. Criswell says that something about Ms. J that was like a mother figure.  Criswell also admires the way that Ms. Janaszek always had the best interest of her students in mind. One particular memory that stood out was in Junior year, when Ms. Janaszek was telling a story that Criswell related to. Outside of school, the one who influenced Criswell the most was their mother. In life, everyone teaches a lesson, whether it be good or bad, and after her death, Isabel’s mother taught them that they always wanted to be an honest person.

When asked whether they would like to start high school over again, Criswell said “absolutely not”. Throughout school, Isabel said that they, like many others, have dealt with bullying, and other unfortunate aspects of school.  Criswell followed up with, “high school is both the best and worst years of your life.” They live by the motto “It could always be worse.” Isabel gave some solid advice when asked what they would say to younger students. Though it will not always be great, Isabel Criswell still encourages younger students to go out and have fun. “Make friends, go to parties, live it up because you’re only in high school once.”