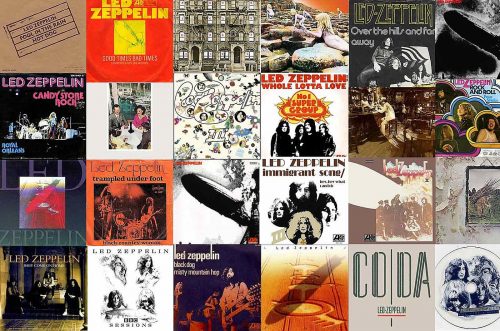 Known as one of the founders of heavy metal, Led Zeppelin is one of the most influential bands of all time. Rooted in blues, Led Zeppelin quickly developed its own unique style that has the ability to draw the listener in and leave them wanting more. A combination of deep heavy bass riffs and complex guitar solos along with high pitched vocals gave Led Zeppelin its sound. Debuting in 1969, with their album Led Zeppelin, Jimmy Page (guitarist), Robert Plant (vocals), John Bonham (drums), and John Paul Jones (bass) showcased their talent. The first song on the album, “Good Times, Bad Times”, was a combination of striking guitar riffs from Page, and Bonhams unique triplet technique on the bass drum. All tied together with relatable lyrics, “Good times, bad times, you know I’ve had my share.”

One other notable song on this album was “Dazed and Confused”. Led Zeppelin’s blues roots are heavily showcased straight from the beginning, with a slow deep bass guitar riff that sounds like something straight out of a spy movie. This song, unique with its slow beginning, fast paced middle, and return to slow in the end, soulfully tells the story of an unfaithful woman and her man who will do anything for her. An interesting fact is that Page actually used a violin bow on his Les Paul guitar, this created the unique sound of the solo.

Their second album Led Zeppelin II is when they introduce their clever Lord of the Rings references. Their song “Ramble On”, takes place in the mythical world of Middle Earth. Plant even says “Twas in the darkest depths of Mordor, I met a girl so fair. But Gollum and the evil one, crept up and slipped away with her.” These references are continued throughout their future albums. One thing that many overlook in “Ramble On” is the bass. Jones creates a heavy backbone for the song, and if listened for, it adds so much more to the song.

What would become one of their most recognizable songs, “Whole Lotta Love”, also debuted in this album. The only issue with this song-this is also true for “Dazed and Confused”– is that the song has a very long instrumental right in the middle. This instrumental breaks up the song and feels misplaced, and I personally fast forward through this part. Other than that, the song is definitely one to dance to.

On Led Zeppelin III the only really notable song would be “Immigrant Song”, a short, face paced song about Vikings, war, and Norse mythology. It features a short staccato riff that the guitar, drums, and bass follow, and it is recognized by Plants “war cry” in the beginning. This song was used in the movie School of Rock, and in the Marvel movie Thor: Ragnarok.

Last but definitely not least would be Led Zeppelin IV, which is full of hits. Starting off with “Black Dog”–named after a stray that would frequently visit the place where the band was staying- is a song about an alluring woman. With its fast pace and rolling bass riff, this song is definitely one for the dance floor. “Misty Mountain Hop”, another homage to Lord of the Rings is about Bilbo Baggins’ home town.

Considered their most popular song, and the most popular rock song of all time, everyone has heard “Stairway to Heaven” at least once, even if they did not know what it was. Beginning with a slow acoustic guitar solo and a recorder, the song gives off a mythical medieval feel. It is a progressive song, with each verse becoming faster and faster until the guitar solo, where after Plant sings in his signature distorted rasp. The layers and building of the song gives a first time listener a surprise at each verse, and leaves them wondering “How heavy is this going to get?”

The song itself contains many meanings within it. The two most concrete are the warnings against being materialistic, opening with a woman who believes she can buy her stairway to heaven. The other meaning is about a man (actually referring to Jimmy Page) who travels up a mountain looking for a mystical hermit, only to find out in the end that he and the hermit are the same. All the other lyrics are up for interpretation, Plant himself said that even he thinks of them differently each time he sings them.

One interesting fact about this song is that it is banned in music stores. Due to the movie Wayne’s World, in which the main character tries to play the song and is told no, many people began playing the song in music stores. It got to the point where employees wanted to tear their hair out, and many started putting up signs saying “NO STAIRWAY TO HEAVEN”, just like in the movie. There are some stores that still allow it to be played, but it has to be played in full and correctly or the person is kicked out.

The band retired in 1980 after John Bonham’s death due to alcohol related asphyxia, though their legacy remains. The founders of heavy metal and creators of the eternal “Stairway to Heaven” created music that all in all, envelops the listener and takes them to a far away place, whether that place is Middle Earth or their own imagination. Each member of the band was extraordinarily talented and brought techniques to their songs that made them unique and memorable. Their lyrics and sound are deep and special, “and if you listen very hard, the tune will come to you at last. When all are one and one is all, to be a rock and not to roll.”