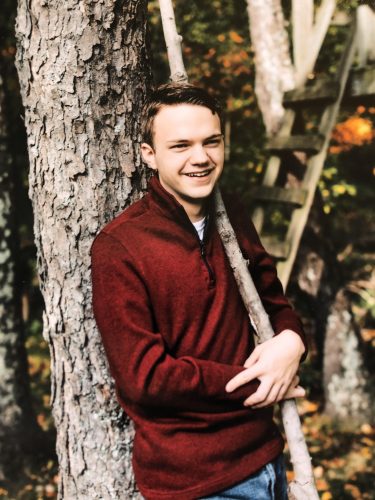 Brayden Brooks is one of those unquestionably memorable people that you come across once or twice in a lifetime. His outgoing nature allows him to leave an impact wherever he goes. He fits the mold of a Super Senior perfectly.

Neshannock ought to have more people like Brayden, extremely dedicated to their studies because they realize that working hard tends to bring great rewards. Driven individuals drive the world.

Brayden has his sights set on Penn State, although he thinks it would be incredible to go to Carnegie Mellon. As you might know, Carnegie Mellon is an incredibly selective institution, which is why getting accepted there would be, for him, like a dream come true. Post-college, he sees himself working in either engineering, music theory, or both.

As for extracurriculars, Brayden is no stranger to after-school activities. He has been part of the school musical for as long as he’s been able to, as well as STEM Club. If he had to choose a favorite out-of-the-classroom pursuit, though, he would pick band. Being someone who likes being involved with music, he thoroughly enjoys playing music with his fellow bandmates.

Speaking of his mates, Brayden found that he really missed being able to hang out with his friends when the country was in strict quarantine this spring. It was hard for him, an extrovert through and through, to not see his friends on a daily basis. They texted and tried to set up things like online games, but it was admittedly tricky. Conflicts were inevitable.

All of the seniors had to fill out a survey as a sort of prerequisite to these profiles, and they were posed all sorts of questions, from where they pictured themselves in ten years to their favorite school subject. Something that becomes immediately apparent when reading through Brayden’s survey is his passion for being a good person through Christianity. He cites God and his relationship with his youth group as the most influential things in his life. Everyone is certainly entitled to their own beliefs regarding religion, but it is clear that, for him, this has laid the foundation for a lifetime striving towards good behavior.

Brayden has very much liked being involved in Neshannock’s spring musicals. His favorite would have to be Damn Yankees because he was able to have more of a major role, which made the experience just a little more exhilarating. One thing’s for sure, though. The world’s a stage, and we’re just waiting to see what the next act has in store for him!