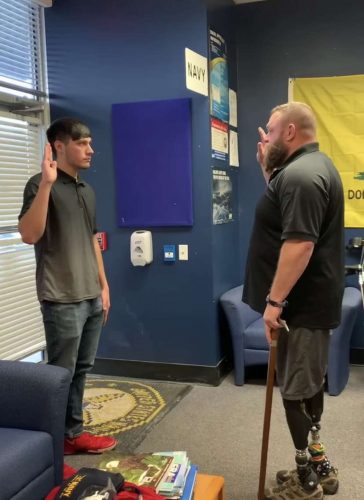 Keenan Burkett is a well known senior here at Neshannock High School. He is a friend to all he meets, but he especially likes hanging out with his close friends. He enjoys fishing and hunting like most teens around here. And, he nevers misses out on a chance for a drive to Hot Heads or any other restaurant with his friends. He seems just like a normal teenager when you first meet him, but as you look deeper into his life and his hopes for the future, you’ll quickly learn that his story is more than what meets the eye.

Keenan, the oldest of his six siblings, spent most of his early years growing up in a large military community in North Carolina. His parents were both Marines, and they taught him how to be confident and self- assured from a young age. He states, “We were lucky, as a military family, that we didn’t have to move around as much as others did.” But in 2012 they had to move to a Navy base in Maryland following an accident with his father overseas.

This altered nearly everything that he knew his whole life, and it ultimately could be seen as the end of what he knows as his childhood. While he faced the difficulties of navigating a new school and a new community, he also had to take care of his younger siblings as his mother devoted much of her time with his father to help him recover. He told me, “At the age of eleven, my eyes were already opened to a lot of things people would consider sensitive subjects, including the horrors of what war can do to people.”

Nevertheless he and his family persevered through difficult times. Four years later they were able to move back to their house in North Carolina. During this time they attended a new school and he learned to adapt to his new surroundings, which would ultimately help him roughly a year later when he moved here, to Pennsylvania.

He quickly understood the difficulties of moving to Neshannock. He explained to me how moving here was a bit of a challenge considering everyone has known each other for their whole lives and everyone’s families are all friends. He knew that the moment he stepped foot in the school he would stand out from everyone else. Because of this, he learned that standing out isn’t necessarily a bad thing. And, throughout high school he learned exactly what he wanted to do after graduating.

For most of his life he has wanted to follow in the footsteps of his parents and join the services. He ultimately chose the United States Navy to join the Construction Battalion, known as the Seabees. He chose this path so he could learn to operate heavy machinery without paying to attend a trade school. As of Friday, January 22nd his father, being a retired Marine officer, was able to enlist him officially into the Navy. He is very grateful that all of his family and friends have been supportive of his decision.

He closes out with, “One thing I currently strive for is to be an inspiration to people who know my story. When I leave for the Navy, I will miss the closeness of our grade here but more than that I will miss the people who helped me through so much and taught me how to be a better person.”