STUDENT EDITORIAL: Braving the Belly of the Beast, an Analysis of Amanda Gorman’s Inauguration Poem 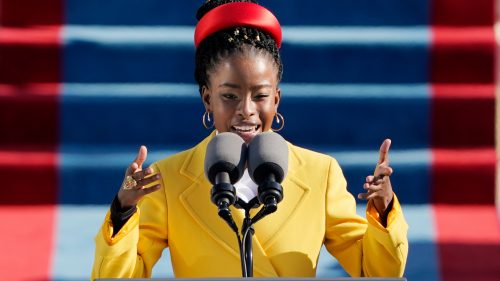 Before we take a dive into President Biden’s inauguration poem, “The Hill We Climb”, written and delivered by 22-year-old poet Amanda Gorman on January 20, it is important to acknowledge something. A common misconception with the 19th Amendment to the Constitution is that it granted all women the right to vote, whereas in reality it left women of color in the proverbial dust. It wasn’t until 1965 with the passage of the Voting Rights Act that Black women, after all their activism, were finally allowed to participate in our nation’s democracy. So seeing this young Black woman deliver her incredible poem in front of the Capitol building (where two weeks prior a mob of angry Trump-supporting insurrectionists stormed) is a reminder of how women of color hold a unique perspective, and how much we can learn from uplifting their voices.

The youngest ever inaugural poet recognized that these past four years have not been easy on anyone. The bigotry, the racism, and the white supremacy displayed by the former president inspired hordes of people to publicly wave around their hatred like a crude flag. “We’ve learned that quiet isn’t always peace/and the norms and notions/of what just is/isn’t always justice,” she noted. And she followed these grave words by commending us all for soldiering through in pursuit of a better country.

Gorman had been about halfway through writing her poem before the grim events of January 6, from which she drew inspiration. The lines “We’ve seen a force that would shatter our nation rather than share it,/Would destroy our country if it meant delaying democracy” perfectly summarize the Capitol riots.

Her intent, however, was far from to dwell on the past. She wanted to use these recent events to force us to look ahead and see what we can do to be better, to encourage us to “lay down our arms/so we can reach out our arms/to one another”. Acknowledging history means coming together to make sure that history doesn’t repeat itself. Bringing us back to the riots was a sober reminder to all of us of how much we still have to get done as a country, but she brought us back primarily to drive us to act.

If we are to foster change in this world, we have to prioritize unity and hope.

Of course, the end goal isn’t a melting pot, where all cultures mesh together to make something one-dimensional for the sake of being distinctly American, but rather a salad, where the unique aspects of our country’s people are preserved. Diversity is vital. We ought to commit ourselves to honoring people of all colors and backgrounds, because in doing this we are actively working towards a sense of togetherness in that we are coming together in celebration of our differences rather than branching out in disgust on account of others being “too different”.

She wasn’t afraid to make her audience really think. In some of the most powerful lines of the work, she reminded them that they were “the successors of a country and a time/Where a skinny Black girl/descended from slaves and raised by a single mother/can dream of becoming president/only to find herself reciting for one”. We’ve come a long way as a nation, and yet we still have so much work to do in terms of such things as racial equality.

Work on that front, and other fronts pertaining to visions of equality, is far from over. Gorman was all too aware of this and admitted that we are “far from polished” and “far from pristine”, but our objective isn’t to be those things. The pursuit of perfection will always be a futile one. If anything, we are aiming towards forming a nation with purpose, bursting with heart and soul.

Her message was clear. Be confident that we have the power to come out on top in the wake of catastrophe, and be pertinacious in the fight towards justice. Move forward, because that is the only way we can get anything done. We may be bruised, but we have all the fierceness of a lion, and we’re not going to give up anytime soon, regardless of how many mistakes we might make along the way.

Why? If there’s anything the Trump presidency has taught us, it’s that rebuilding has never been more important. But rather than endeavoring to make America great again, we must make America as great as it can be in the now, with all our diversity and beauty. If we join forces in benevolence, there is no telling what good we are capable of.

And no pressure or anything, but as Gorman quotes from the Hamilton musical, history has its ever-watchful eyes on us.