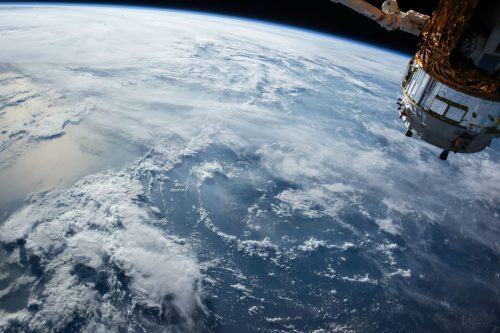 Space is our future, and as we become more reliant on it, the likelihood of disaster increases.  Every year nearly 1000 satellites are launched into space,  each providing necessary communications, observations, and science to us back here on Earth.

What Part of Space are We Talking About?

To be clear, the space that is in danger is a place called Low Earth Orbit.  Low Earth Orbit is the space 100 miles to 620 miles above the Earth’s surface.  It is a relatively small region of space, but it completely encapsulates the Earth, and is critical to our modern world.

LEO is full of satellites that are incredibly useful, and also full of trash that is not so useful.  At 17,000mph, any object larger than a particle of dust could destroy a satellite or a spaceship. Even flecks of pain have proven near-disastrous in the past.

There are currently 130 million objects from 1cm-1m orbiting the Earth in Low Earth Orbit.  The scenario that scientists are most worried about is the collision of 2 satellites.  This would shatter the satellites into thousands or millions of pieces, which could then do the same to more satellites.  This is the driving point of the plot of the movie gravity.

What Happens if Things Get Out of Control?

If LEO becomes subject to Kessler Syndrome, as it could at any moment, what would actually happen?  Firstly, the United States Space Force monitors most of the large debris in LEO, and advises companies when to move their satellites if the satellites are able to be moved.

If for some reason, either the satellites are uncontrollable or malfunctioning and they collide, bad things happen.  The astronauts and cosmonauts on the International Space Station would need to rush home before their station is riddled with debris like a machine gun.

We would all then begin to notice some slowing of some of our telecommunications that are satellite-based.  This does not include GPS, as those satellites are farther away from Earth and are safe.

Lastly, the most important and everlasting impact of this event, launched into space would become impossible for the foreseeable future.  With all of the debris circling the Earth at 17,000 mph,  it would be too hazardous to send anything into space.

Even if your satellite is not destined to be in LEO, it will still need to pass through that zone, meaning any Earth departure or landing would be nearly impossible.  Our future in space depends on resolving this issue now,  or else we will be stranded on Earth for generations to come.