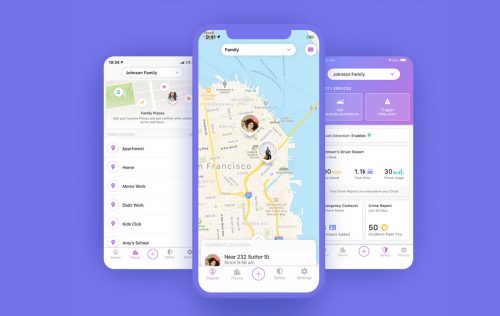 The iPhone application Life 360 has become very popular among parents. Safety is the main intent of the app, but now the app is being used mostly by parents to track their children, making sure they know where they are at all times. The app itself is a location-based service that, when you download and create an account, will share your location with whoever you see fitting. In this day and age it is used across the country by people keeping track of their loved ones and making sure they are safe.  Though parents love the app, their kids on the other hand, may have an entirely different opinion on the app and its capabilities.  Which poses a provocative question:  Is Life360 being as helpful as it can be harmful?

When our parents’ generation was our age, their whereabouts weren’t always known by their parents, giving them a sense of privacy and freedom. This isn’t the reality of any teen who is part of a family that uses Life360.  The “kid side” of the app is widely known by people of my generation (I’m a senior this year), but it might be unclear for those who haven’t used the app.  Nowadays, our generation can’t walk down the street without a cellphone sending a notification to their parents that they left the house. This notification is possible by using Life360:  parents can be notified as their child leaves or arrives at places, if they choose to use these types of settings in the app. Many of my peers have the app for that safety reason that our parents love. As a young adult, I feel as though this app is a way of actually communicating distrust between family members. By being able to track our every move, teens may feel as though our parents don’t trust us to go out into the world and do what we want to do.

To express the different opinions of this app and its users further, I conducted an interview with a family in the Neshannock Community that uses the app. I interviewed the mother, the teenage son, and the 20 year old daughter to see their perspective.  These interview participants wished to remain anonymous for the purpose of this news story. I asked the same four questions to each family member, then one question specific to each family member to see their feelings towards the app based on their age.  Their answers add insight into how this app affects an entire family.

My first interviewee was the mother.

Her word was “relief” because of the app’s ability to show her when her kids were home safe.

Question 2: How long have you had the app, and did you force your kids to get it?

She told me they all got the app in 2008 when it was released, and that she did not force them.  They all got it without her asking.

Her answer (again) was that she got it to make sure her family members are safe and to know where people are when she needs to find them.

Question 4:  Do you think Life 360 is helpful or harmful?

Her answer was simple, “it is very helpful, it gives me relief in the safety aspect”.

Individual Question:  What are some things, unique to the time when you were growing up that Life360 could have helped with?

She told me that there was nothing specific that would have changed, but she realized that with this app, kids today can’t sneak out as much as her generation did. She understood the freedoms that they had then that we don’t anymore because of this app.

My next interviewee was the teenage son.

He simply stated that he saw the app as “protective”, because it gives parents the opportunity to see where their kids are at all times.

Contrary to his mother’s response, he said he was forced to get it because his other family members had it.

Question 3: What is the main reason you had to get Life360?

He believed it was because of his mother’s paranoia in needing to know where he is at all times.  He also told me how unnecessary the app is for him because he doesn’t go many places.

Question 4: Do you believe Life360 is helpful or harmful?

His answer was very interesting to me. Despite his other answers, he pointed out reasons that the app could be both helpful and harmful. He said it was helpful because of its ability to show where family members are and make it easier to find them if there was an emergency. But he also pointed out the harmful part of the app which is the trust issue between parent and child. He said, “it just takes away trust and makes kids feel like they aren’t responsible because their parents watch every move”.

Individual Question: Do you think this app will continue to be popular? Or do you think people will stop using it?

He told me he believed people will be using it for years to come, he believes once our generation becomes parents though it will be forgotten because we won’t want to make our children feel like we did.

The final interviewee was the 20 year old daughter of the family who is currently enrolled in college out of the state.

She couldn’t find just one word but described it as “the opposite of private”.  She came to the phrase “tied down” and explained it was because everybody knows each other’s location. She expressed her distaste for not being able to do simple things on her own, such as going to the library to study.

Her answer also disagreed with her mother’s and said that she was forced to get it back in 2008.

Question 3: What is the main reason you had to get Life360?

She expressed that she understood the reason she had the app was so her parents knew where she was for her own safety.

Question 4: Do you believe Life360 is helpful or harmful?

She said that she didn’t believe it went in one direction, “it is helpful when there is an emergency, but harmful in many other instances. Most of the time parents just watch to see what their child is doing, then their own lives aren’t so private”.

Individual Question: Do you think you will use this app on your future children (if you have any)?

She started out by saying that she would definitely have them get it when they were younger. But as they progressed into their senior year of high school, she would give them the option to not have it anymore so they could have some freedom. She said especially during that last year of high school going into college, young adults need to be able to be trusted to have freedoms and to trust themselves to make the right decisions.