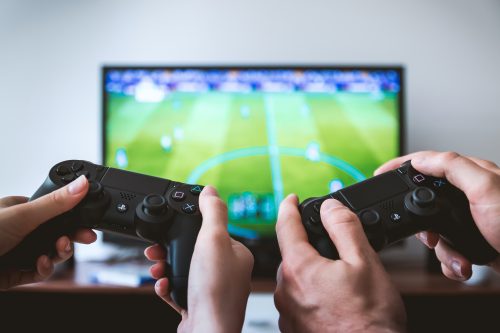 Celeste is a game about overcoming challenges. You play as Madeline, whose journey consists of reaching the summit of Mount Celeste and coming to terms with who she is. The player must overcome the challenges that Celeste’s tight platforming presents while Madeline must overcome her struggles.

Celeste consists of nine chapters. Each chapter has multiple different sections that each consist of numerous screens. Each screen has different challenges or puzzles that the player must complete.

The first few chapters aren’t too hard. They consist of basic mechanics that work around the game’s core movement. You’re given the ability to climb, dash, and jump. You can dash vertically, horizontally, and diagonally. When you dash in the air, your dash won’t refill until you touch the ground again.

The dash also refills with the various objects in the game. These objects include crystals that refill the dash mid-air, bounce pads, bubbles that send you in a set direction, and more. In some cases in later levels, these mechanics are all present, and all need to be used together to complete certain screens. Each chapter introduces some kind of mechanic to make it different from the last.

Celeste’s levels are designed to be difficult but not so difficult that the player gives up. The game doesn’t have limited lives or any time restriction. If you fail you’re just sent back to the beginning of that screen you were on. The game doesn’t heavily punish failure as some others do.

In Chapter 2, Madeline’s other half (also called Badeline) is introduced. Madeline finds a mirror that shows a dark reflection of herself. The reflection escapes the mirror and changes the level, changing previously frozen obstacles into Dream Blocks. Madeline can dash through these blocks, which sends her through them. In the later parts of the level, Madeline runs from Badeline. She can’t face her problems head-on yet and is forced to run from her, resulting in a chase sequence.

Chapter 3 introduces Mr. Oshiro, the ghost that runs the Celestial Resort. Mr. Oshiro also has anxiety. He’s lonely and insecure. He believes that he’s doing a poor job running the hotel and that he’s the reason that Madeline won’t stay there.

Madeline does her best to try to help him. She cleans the place up and compliments him and his hotel. It doesn’t work though, and eventually, Badeline intervenes. She calls Oshiro pathetic, making him turn into a monstrous version of himself that Madeline must then run from. She isn’t able to help Oshiro, which shows that you can’t just force people with these issues to recover, and attempting to do so could even make it worse.

Sometimes the best way to help is to just be there for the person. Chapter 4 ends with Madeline going up a ski lift with Theo, another climber that she met along the way. Badeline causes the lift to stop which makes Madeline have a panic attack. Theo helps by recommending that Madeline focuses on a feather that lifts when she breathes. This calms her down and the lift starts moving again.

Chapter 5, the Mirror Temple, finds Madeline and Theo entering a temple on the mountain. This level has a larger focus on exploration, including larger and more open rooms. After exploring the level, Madeline finds a large mirror. It turns into a portal and the temple changes to reflect her inner thoughts. This creates monsters called Seekers.

After more exploring, she finds Theo trapped in a crystal. She cannot break the crystal and has to carry him out of the temple. This is used as a way to show how people can help each other. In previous chapters, Theo was able to help Madeline but now she’s the one helping him.

Chapter 6, Reflection, begins by introducing the feather mechanic. When picked up, Madeline is turned into a glowing ball that allows her to fly. She meets Badeline in the sky and attempts to set her other side free. She tries to let go of Badeline. This angers her and results in Madeline having another panic attack. This time, however, Madeline is thrown to the bottom of the mountain.

She becomes lost in a crystal cavern and begins to lose hope in her ability to climb Mount Celeste. She’s upset that she came so close but ultimately wasn’t able to finish the journey. She’s angry at Badeline and herself. The music for Reflection is melancholic and sad, further setting the tone of the level.

She finds Granny partway through the level, who suggests that she should try talking to Badeline. Granny thinks that Badeline might just be scared of climbing the mountain.

Madeline takes this advice and faces Badeline head-on. The end of chapter 6 is a reflection of the end of chapter 2. This time, Madeline faces her problems head-on. After a long chase sequence, they decide to work together. They understand each other by the end of the chapter. They merge into one, and Madeline gains a second dash. They climb out of the cavern to find Granny and Theo, who rushed to help Madeline.

Instead of running from her fears, she’s able to face them head-on and conquer them.

Chapter 7 is a rerun of all the previous chapters. Madeline and the player are able to make it through these harder versions of previous chapters. This along with Chapter 6 show that both have grown throughout their journey climbing Mt. Celeste.

It ends in a challenging 30 flag sprint with each flag being equivalent to a screen in past chapters. Each flag presents a different challenge, and this is by far the most challenging section of the first 1-7 chapters.

Mount Celeste is used as a metaphor for Madeline’s depression and anxiety. The mountain isn’t the only thing that is used in that way. Badeline and the eye creatures in Chapter 5 are both physical representations of her anxiety and depression. As the game says, they’re a Part of Her that the mountain brought out. The dust bunnies in Celestial Resort are the physical form of Mr. Oshiro’s anxiety and insecurity.

In the Mirror Temple, there are eyes in the wall. These eyes are always watching Theo. This reinforces his obsession with how people perceive him. It’s been shown that he’s obsessed with social media in earlier chapters but this chapter shows how much it truly matters to him.

Celeste’s music also reflects the game’s themes. Specifically, “Anxiety,” which is used in the lift at the end of Chapter 4. It begins with Madeline’s theme, played on the piano. When her panic attack starts, her theme is overtaken by synths that sound like a blaring alarm. They drown out the piano, representing how her panic attack is overwhelming and scary for her. As Madeline breathes to keep the feather floating, the music calms down and her theme returns.

The final flag of chapter 7 is quiet. The music that has been present throughout the entire game fades out. The obstacles almost completely disappear. It’s meant to be calm and quiet. Madeline reaches the top of the mountain and instead of celebrating, she sits down and reflects on her journey. She and the player overcame all of the challenges of the mountain. They did it.

It’s a quiet moment not only for the story but also for the player. The player is meant to reflect upon their journey and remember everything that they were able to accomplish throughout their time with the game.

In the eighth chapter of the game, The Core, Madeline returns to Mount Celeste. When she returns she’s no longer split in two. This shows that she’s fully accepted herself, including her “bad” half.

The level is more difficult than the previous ones. The gameplay fundamentally changes in the Core. Due to the mountain’s powers being stronger in the Core, Madeline’s dash does not refill as it normally does. The only way to refill the dash in this chapter is to collect a dash crystal. This makes the level harder and more unique than the others.

In the end, she finds the heart of the mountain. Her journey is truly over this time.

Farewell is the ultimate challenge that Celeste can provide. The ninth chapter of the game was released as DLC over a year after the original release of the game.

The story is also continued in this chapter. Granny passed away, and Madeline wasn’t able to make it to her funeral which made her feel guilty. She returns to the mountain and finds her grave. Then, a bird which she believes to be a Part of Granny appears. This bird appeared throughout the rest of the game and guided Madeline. She follows the bird up into space, then fights with Badeline which causes her to leave. This leaves Madeline alone to go after the bird. She follows it throughout the chapter and eventually catches up to it. This leads her to talk to Granny for one final time.

Farewell also includes an entire soundtrack. It’s made up of 13 individual tracks, and they’re all very unique from the soundtrack in the main game. The music has different sounds and themes because of the story of the chapter and how the chapter takes place in space.

Farewell is not only the hardest chapter in the game but also the longest. The chapter is made up of nine sections with each including numerous screens. Without including side paths, there are over 100 screens in this individual chapter. Each section gets progressively harder than the last, introducing new mechanics and more complex versions of old mechanics.

Farewell serves as, well, a Farewell to Celeste. It’s the ending of the story, the conclusion to both Madeline’s and the player’s journey. It’s a long, challenging, emotional level.

This chapter’s platforming manages to be even harder than some of the alternate B and C sides of the previous levels, which are each incredibly challenging on their own. Some sections require platforming and timing so precise that it can take hundreds of attempts to complete a single screen.

The new mechanics introduced in Farewell also add to this challenge. They’re completely new which means that the player must learn and master an entire set of new mechanics. The older mechanics are also updated to be far more challenging than they were previously.

Farewell’s (along with the rest of Celeste’s) difficulty enhances the themes of the story. Madeline and the player are both able to overcome their challenges by the end of Farewell. It’s a wonderful sendoff for one of the best games I’ve ever played.